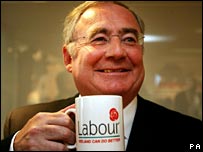 As they set about interviewing a whole bunch of ministers in our “new” government, our good friends over at Newstalk (@breakfastnt on Twitter) were looking for questions for Pat Rabbitte.

I sent them a tweet requesting them to as him if he remembered being a socialist, and if so, why did he stop?

In the Moderate party, Sweden possesses the most left-wing Tory party in the world- in Ireland, Labour is to the right of Sweden’s tories.

Where else would a party of the left stand idly by and watch billions- that’s BILLIONS- of taxpayers money stolen from the people to pay back speculators?

Where else would a party for working men and women sanction a raid on their pensions to make up for the shortfall caused by the orginal robbery?

Where else would a socialist group propagate the shallow, facetious argument that if Ireland defaults, there will be no money to pay “the nurses, the police, the teachers”?

Let’s bury that one once and for all.

The simplistic notion that by not paying it’s debts, Ireland would become a pariah state is utterly laughable. Ireland already is a pariah state and the markets are quite rightly punishing us- consistently and severely- for our past, present, and future sins.

Whatever fear it is that has been keeping the ministers awake, they can sleep easy. It’s already happened.

There is another issue. Brendan Howlin and his Quislings seem to think that the markets simply rock up in their SUVs, check to see that we have paid our previous bills and then lend us more money. He’s trying to say that it doesn’t matter what caused the default, but simply that if we do, the markets will be closed to us.

Which, of course is rubbish. The markets know exactly what will cause us to default- after all, they are the ones that forced it, massively over-charging Ireland for money it borrowed to pay back debts that it didn’t owe in the first place.

Not to mention their careless lending, total absence of risk management and the short-selling of the banks and other institutions. And by charging ten percent or more, the markets are closed to us already.

Sooner or later, Howlin and the rest of the new left-right brigade will realise that they are tilting at windmills. The markets are treating us as if the default has already happened- it is, as the market term says, “priced in” to Irish debt.

As is the billions- BILLIONS- pumped in to the banks and NAMA. And they know that we can’t pay it back.

People in the markets sit in front of information terminals that cost thousands of euros a month that help them make their decisions and calculations, but when it comes to Ireland they can do it on the back of a beermat. We have small tax revenues, big debts and big expenditure. Go figure.

The way out of this of course, would be to clean up the balance sheet- the innate greed of the markets means that, if they think there’s a chance that we will pay the next loan back and they can make money of it, they will lend to us- indeed, they had previously written off Irish bank debt, only to be handed a lifeline by the odious Brian Lenihan.

And maybe if the nice people at Newstalk ever get around to asking my question of one of the Labour ministers, it might shock them into remembering what they are supposed to stand for as democratic socialists- governement of the people, for the people, by the people.

Not of the people, for the banks, by the grossly inept as it currently stands.