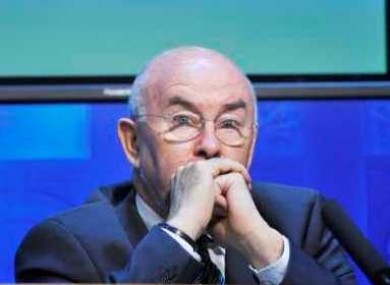 Ruarí Quinn - blue seems to suit him better these days...

You’ve all heard of them.

The African family up the road who were given- given!- a 2007 Toyota Corolla because they claimed they were victims of racism on the bus.

Imagine! Given a car! No-one ever gave me a car! And now he’s using it as a taxi! A TAXI!

Or the single mother who has a bunch of children by three different fathers, who spent a month in Thailand last winter.

In Thailand! Earns a fortune she does, and it’s all from the social. I can’t afford to go call me sister in Thailand, let alone go there.

You’ve heard of them alright, but you’ve never met them.

That’s because they don’t exist. Not really.

And because they don’t exist, we have to invent them. And when we’ve done that, we use them as a stick to beat every other genuine person in the state who has fallen on hard times.

Break it to the tabloids gently, but for the vast majority living on social welfare, it’s no walk in the park. Two hundred euro a week in one of the most expensive cities in Europe (Dublin) is peanuts. And the number of people having to do so is growing all the time.

“Ah Jaysus, but they get rent allowance- HUNDREDS!!” they cry on Adrian Kennedy and Joe Duffy. True, but it is hardly the fault of those on social welfare that rents are so high and state accommodation so scarce that they are pushed into the arms of private landlords.

“But they don’t even WANT to work! If they did they’d take a job for whatever they could get! There’s no INCENTIVE for them- they should have their dole cut, so they should. They wouldn’t be unemployed very long after that!”

This is usually said by those with a comfortable living on more than the average industrial wage, who have never been down to their last tenner.

These are also not the kind of people who would work for the minimum wage in their wildest dreams, and yet they expect everyone else to do so.

After all, if everyone was forced to work for a euro an hour sure the whole country would be employed- and we’d never have any chance of paying back the massive debts of the banks that we stupidly accepted as ours.

All this comes in the light of Labour ministers (remember, they’re the ones supposed to look out for the little man, the unemployed and the working poor) being paraded all over the radio today to talk about how they were going to get people back to work – despite there being little or no work available.

When questioned about the tragedy of people with no other income having their social welfare removed, Ruarí Quinn gave the sort of glib answer only a career politician could give.

“We are in receivership thanks to Fianna Fáil, and not in charge of our own cheque book anymore,” said Ruarí as he not-so-deftly sidestepped responsibility.

He also neglected to mention the he- and virtually everyone else in Leinster House at the time, allowed this to happen- complicit in handing over economic sovreignty via the bailout either by their support or their silence.

It has to be said- there is too much social welfare fraud in Ireland, and it needs to be dealt with. Those that engage in it should be called by their proper name – criminals – and held to account. They are effectively stealing from every taxpayer, as well as those more needful than themselves.

If they did, they wouldn’t be trying to cut their payments without having the slightest idea what the unemployed should do instead.

I don’t have the answer to the jobs crisis (no more than Ruarí Quinn, the OECD or the IMF has), aside from the fact that we should be retraining people for the kind of jobs that will exist in two or three years’ time, and looking to build on export potential in the meantime.

But what I do know is this. Reducing unemployment benefit does not create jobs – in fact it actually hampers job creation, as unemployed people as a rule spend every penny they get trying to make life tolerable for them and their families.

This money goes to the local shops, the local doctors, the local schools and transport companies, which- unless you ask Ruarí Quinn- actually has the effect of creating viable, sustainable jobs in every community in Ireland.

Maybe it’s time for Ruarí and the rest of the boys to create a few jobs in graphic design by investing in the long-overdue overhaul of Labour’s brand, including dumping the old socialist red for a more Tory-friendly blue.

Either that or face a case under the trade descriptions act for misleading people into thinking that they cared about the common man.

Who knows, maybe the African man with the 2007 Corolla might even make a tenner from driving Ruarí and Joan to the hearing.

Under the table, of course.

One thought on “Urban myths and uncomfortable truths”