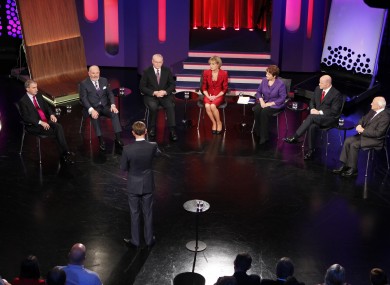 The not-so-magnificent seven on the Late Late Show.

What occurred on the Late Late on Friday wasn’t a presidential debate – at least not in the accepted sense.

Despite showing a nice line in creative questioning (“why did you leave the IRA in 1974?”), host Ryan Turbidy acted like a conduit for the seven spirits in front of him, channelling their answers through his autocue Ouija board instead of letting them interact properly.

Ultimately, as it often is with the Late Late these days, it was ambitious but unsatisfying.

There were several reasons for that, three of which are Mike Murphy and Jedward.

There was absolutely no point in having them on the show but the Late Late is something of a curate’s egg, and sometimes things which don’t make sense to the lineup slip – or are forced – through the gap.

In the usual Late-Late-As-Pravda mode, the live Mike has a new show starting and so he MUST appear on the Late Late this week, despite his obvious reluctance.

As for Jedward, I like them but for once their appearance wasn’t the main event.

The producers would have been wise to save them for when they were faced with a weaker lineup of guests- judging by the first few weeks of the season, it’s not like the show lacks such opportunities.

Time to cast a cold eye over the candidates.

It seemed pretty clear that Michael D, the Gandalf of the Labour party, was the only one who actually had any idea what the role of president of Ireland entails. He shrewdly quoted relevant legislation and practice, and dealt well with questions about his age.

David Norris is starting to irritate people. His attempts to whip up frenzied support in the studio came across as pompous foghorning, and the senator would do well to remember that many people would like to see him in the Aras despite themselves. Another couple of performances like that could well lead them straight to the door of Michael D.

Gay Mitchell displayed a look similar to many of those he claims to have supported – those on death row. Fine Gael’s nomination of him seems to have been a death sentence for his political career, and a streak of self-pity is becoming apparent in this previously tenacious electioneer.

Dana is a religious version of Jim Corr, and if she’s elected president we should bring the shutters down on our  Republican experiment and run headlong back into the none-too-welcoming arms of the British. The woman is an embarrassment.

One who mightn’t be happy with that idea is fellow northerner Martin McGuinness, who, like Norris, couldn’t resist the urge to grandstand and fell flat on his face as a result. Employing six young people off the dole with his wages sounds all well and good, but not one bit presidential.

Mary Davis doesn’t like questions about where her money came from, or her political connections. Her bristling at these questions would suggest that this “Independent” candidate is not so independent after all.

Of all the candidates, the most vibrant and energetic was probably Seán Gallagher, but Gallagher’s problem is one shared by many of the other candidates; he is fighting the wrong election.

His rhetoric about Ireland and creating jobs and pride is spot on, but it is for a general, rather than a presidential, election. The same goes for Dana’s anti-European Jesus-freakery.

The more I hear about issues like fairness, respect, tolerance, jobs, mental health and suicide, the more I think that these people should be on the doorsteps of the working-class estates of this country in a general election, not robbing Mike Murphy’s shot at the big time on a Friday night.

Gallagher would make a great Minister for Enterprise, Mary Davis for Equality, Gay Mitchell for Law Reform. Martin McGuinness would make an interesting president, but his work is not yet done in the north, and there are still too many who remember the less-than-savoury antics of the IRA under his command for him to be truly electable in the south, not least among the media.

Dana would make a great Minister for State, as long as her office is a padded room in a secure building with the sharp objects and her shoelaces removed.

That leaves Norris and Higgins – this race is theirs to lose, and it is highly likely that Norris will lose it.

People really want to vote for  him, but his hollow insistence that he cannot release the letters is about as convincing as McGuinness’s resignation from the IRA in 1974.

It’s very possible that time has already run out for Norris, but he must address the issue once and for all with a very public mea culpa.

To release the letters in full would of course be tantamount to electoral suicide; instead, he must throw himself at the mercy of the electorate in all his flawed humanity.

Tell people that he doesn’t want to release them, even if he were legally allowed to do so.

Tell people that the letters make him look callous toward’s his lover’s victim (and regardless of the consent issue, he is a victim- that’s why the crime of statutory rape exists).

Tell people that the letters make him look petty and small and pompous and overblown, and that they really do portray him in a very un-presidential light.

Because as the Late Late non-debate showed, having seven candidates is unwieldy for the media, and they will be more than happy to make them into single issue candidates.

… the most presidential so far.

One thought on “The not-so-great Late Late debate”