So it came to pass.

Seán Gallagher almost pulled off the impossible, blazing out of the pack only to fall at the final hurdle in what has been one of the most remarkable presidential races in history.

I heard his close friend and PR aide Jack Murray on the radio today saying that Gallagher’s biggest strength – the fact that he wasn’t a politician – turned out to be his biggest weakness too.

There is an immense amount of truth in what Jack says, but maybe not in the way he meant it.

Murray means that a more seasoned operator – a Gay Mitchell for instance- would have met McGuinness’s attack head on. As soon as McGuinness mentioned the cheque, Gallagher should have countered with a quip about fundraising or NorthernBank or whatever else would shift the spotlight.

I have been a student of Jack’s when it comes to media and PR and he is the best in the business. Gallagher’s polished media performances were a testament to his great skill and attention to detail in preparing his client.

But I am of the opinion that both he and Gallagher took their eye off the ball a little and left the door open for McGuinness.

Gallagher’s weaknesses were twofold – his FF past and his business dealings.

He seems to have made forensic efforts to ensure that his business dealings were all either above board or corrected and in truth there was little in them.

His distancing himself from Fianna Fáil wasn’t nearly as effective. Time may heal all wounds, but the public still remembers what Dev’s party did to them. Gallagher shrewdly left the party and cooled off before declaring himself as a candidate, but it wasn’t enough.

As ever in politics, there is no black and white, and Gallagher obviously didn’t feel comfortable condemning the party for its astounding stupidity in destroying the country. Instead, he tried to give the impression that he was a lot further removed from it than he actually was.

Bad move. When McGuinness placed him at the scene of the cheque on the Frontline debate, all of a sudden Gallagher was stuck, and the reasonably innocent business transactions started to look like the underhand actions of a Fianna Fáil bagman. Once that happened, it was all over. 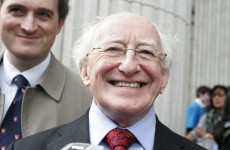 Michael D- you'd be smiling too.

And there, waiting in the wings, was Michael D.

Instead, he let others do the dirty work for  him.

McGuinness delivered the hammer blow on Gallagher, Norris twisted the knife (‘I think the mention of envelopes was unfortunate’) and Davis called for him to explain himself.

By midnight Monday, the dragon was slain.

All the while, Michael D stood there looking presidential, his poet’s trap firmly shut- throughout Gallagher’s spectacular rise and fall, he said nothing.

As quickly as Gallagher rose, he fell again. Michael D was back at the top of the pile. Order was restored.

Gallagher is by no means finished in public life, but even his renowned confidence and positivity will have taken a battering.

He may not have won this race, but with the lessons learned here, don’t rule him out winning the next one.

One thought on “‘Cheque mate’ proves silence is golden”