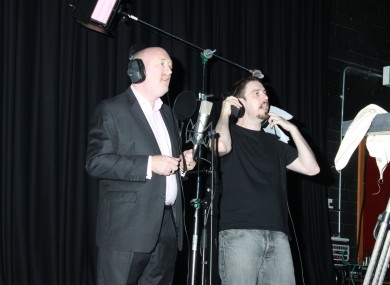 This is what it sounds like when doves cry.

In a fit of rage I just donated €50 to Pieta House.

Tonight’s Late Late Show featured one of the most craven, egotistical acts I’ve seen in a long time- and I divide most of my time between professional sports people and media types.

In a display of staggering poor taste, members of the Irish Oireachtas (the national executive made up of members of parliament and the senate) have recorded “Bridge Over Troubled Waters” as a charity single for Pieta House.

Their Late Late appearance comes on the same day that People With Disabilities in Ireland had it’s funding cut by 100%.

Even in Ireland, where are politicians are born with forked tongues and lauded for their skill with them, this is breathtaking.

Pieta House helps people who are suicidal or who self-harm – that the ineptitude of those singing (which would be criminal in other jurisdictions) have caused so much of the misery that keeps Pieta House so busy was seemingly ignored.

The crass speeches about doing their bit for those in need went unquestioned.

It doesn’t seem to have occurred to simpering buffoons like Finian McGrath and Peter Matthews that there is actually something they can do about it – they can legislate.

It’s what they’re paid for.

That the first cuts made by all politicians in times of crisis are at the expense of the poor made no difference to their warbling either.

Don’t buy this single. The damage caused by the savage cuts imposed by successive governments will not be solved by spending two euro on iTunes.

Instead, give a tenner to someone (why not Pieta House?) and instead, ask your neighbour or your brother or your granny how they’re doing.

Given the current situation, they might be more in need of a listening ear than the despicable egomaniacs that foisted this self-indulgent rubbish on the Irish public.

One thought on “These troubled waters need more than a bridge”