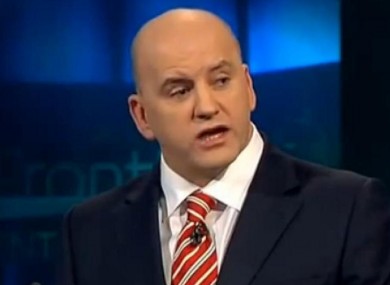 There must have been paroxysms of delight at this week’s Sunday Independent editorial meeting, as the decision was taken to go after all the paper’s favourite sacred cows in the story that had it all.

The paper’s big guns were let loose on the Seán Gallagher fake tweet story, and in their sights they had all of their most beloved targets – Sinn Féin, RTE, the Labour Party, the public service, the “D4 meeja”.

Heroic media watchdog Eoghan Harris – who has written the sum total of nothing about Independent Newspapers and their racist attempts to slur a Polish woman on social welfare in Donegal – is once again to the fore, wailing hysterically about how RTE is a tool of the liberal left and how Gallagher never got a fair crack of the whip.

In what will be a new departure for the Sunday Independent, let’s look at the facts, rather than the misleading, hysterical knicker-wetting of the likes of Harris.

I think everyone would agree that a central tenet of Gallagher’s campaign was to depict himself as not being a Fianna Fáil insider.  This is something he did well, harping on repeatedly about his background as an entrepreneur and as a youth and community worker.

But when the tweet from the spoof  Sinn Féin account put him in a farmyard with a brown envelope in his pocket, the game was up. It was his admission that he may have done so (as is the nature of Irish politics, he couldn’t recall getting a cheque for a large amount of money from a virtual stranger).

Watch the tape of the debate: [youtube=http://www.youtube.com/watch?v=uUhFdi7iRL0]

The first point that Gallagher starts to lose the room is at 5:53. “I don’t want to cast any aspersions on him,” says Gallagher glumly, before performing a clinical character assassination on the man from whom he had collected the money. “I don’t want to get involved in this,” he rounds off, to a ripple of laughter, derision and then mocking applause from the crowd.

They were only warming up.

“I have no recollection getting a cheque from this guy”. More catcalls.

Smelling blood, Kenny steps in, asking Gallagher to clarify- why would you invite a fuel smuggler to a Fianna Fáil do?

(In fairness, recidivist criminals in Fianna Fáil are hardly unusual, but that’s for another day).

Gallagher returns with interest, saying that’s not what the presidential election is about – maybe it was this round of applause that did for him. Maybe he relaxed here and took his eye of the ball.

McGuinness asks the question again and, given enough rope, Gallagher hanged himself. Right there, on national TV.

“If he gave me a cheque”- pandemonium now – “if he gave me the cheque, it was made out to Fianna Fáil headquarters“.

In that one sentence, the careful choreography of his exit from Fianna Fáil, his painfully-sculpted political alibi as nothing more than an ideological dreamer, hi entire campaign as a businessman of the people imploded.

In a race where they hadn’t had the nerve to run a candidate themselves, Fianna Fáil’s bagman was a goner.

Did the tweet have an impact? Yes, and an enormous one at that. And whoever in the control room it was who fed Pat the line that it had come from the McGuinness presidential campaign has some serious questions to answer.

But the impact of the tweet was more in deciding where and when Gallagher’s campaign would end, because end it would.

Sinn Féin and the media were never going to let this one go. Without the tweet he may have survived until the following morning’s radio shows, or even as far as Liveline, but his ship was sinking and everyone knew it.

The tweet may have been the smoking gun, but it was the fact that he had collected cheques on behalf of Fianna Fáil that was the silver bullet that killed his campaign.

Gallagher’s biggest mistake in his campaign was the extent to which he went to distance himself from his Fianna Fáil masters.

Instead of taking the “Road to Damascus” approach – saying he was a member but then became disillusioned – he and his team decided that any association with the party that destroyed the country would be too toxic for the campaign to bear. So they changed his story.

They were wrong. In trying to airbrush himself from Fianna Fáil history, he ignored some of the finer points; we only control the narrative to that extent that our version is the strongest and most plausible.

And when someone else comes up with something better – as they so often try and fail to do in the Sindo  – we’d better watch out.