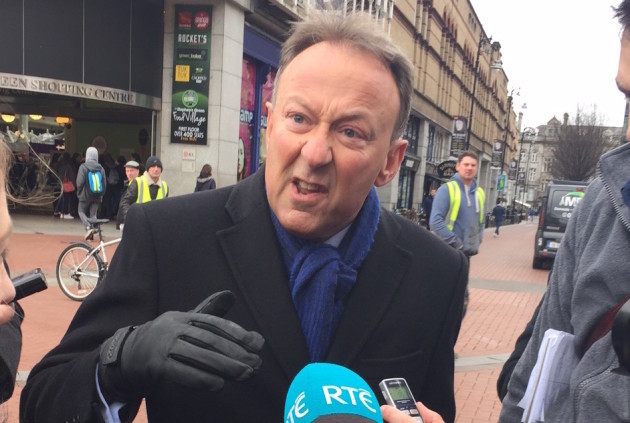 NOTE: Rabo Bank, the parent of Fergus Crawford’s ACC, was never bailed out by either the Irish or Dutch state. As a collective it was never

nationalised, and instead sank €900 million into ACC.

Ironically, if it had been it would have been Dutch farmers who make up its membership that would have lost out.

So while Fergus and ACC were never the recipients of a state bailout, they certainly contributed to the 2008 meltdown in Ireland.

WE ALL FELT YOU IN OUR POCKETS, FERGUS

He accused her and her party of attempting to “tax people out of existence.”

Why? Because if Sinn Féin get into government, he will “feel it in (my) pocket”.

Now not wanting to pay tax is understandable – indeed, tax avoidance is a favourite pastime of many Irish people.

And that this should happen before the TV cameras on Dublin’s most upmarket shopping street is almost too good to be true.

I have previously advised against ever suspecting a conspiracy where common stupidity would seem a more likely reason, but yesterday’s clash was either a divine coincidence, or a clumsy set up.

You see, if the hive mind of the internet is to be believed, we’ve all felt this guy in our pockets, for the last eight years or so.

He’s Fergus Crawford, and we apparently bailed out his bank to the tune of €900 million.

Think about that for a second – one of the greatest corporate welfare scroungers in the history of the state doesn’t want to pay tax.

Fergus didn’t reveal much about his past or present.

For instance, he never mentioned that he was a relatively senior figure at ACC, or that his current employer manages pension funds for rich people, who are not renowned for their eagerness to send cheques to the revenue.

Given that his new venture is an Irish entity for Swiss investment house Sarasin, and that a story in the Irish Independent from 2013 says that they were set to take an office at St Stephen’s Green, it’s a short imaginative leap to imagine Mr Crawford building up a head of steam before charging down his marble steps to confront the people who paid for his mistakes.

Interestingly, Mr Crawford – if it is indeed the same fella who was chief economist and Head of Product Development at ACC, among other roles before the crash – didn’t waste too much time on the “middle-income earners” that he first appeared to be taking up the cudgels for.

Nope, he quickly abandoned them. Instead, his answer to Ireland’s problems was to “create wealth” – presumably the kind of “wealth creation” that he made his name in, and that led to a €64 billion bailout by the Irish people, who are now dying on trolleys for the privilege.

Blithely ignoring the fact that the Internet would out him within hours, our as-yet anonymous concerned citizen (erroneously reported by some as a “small business owner”) then moved on to his real concern – “What about their pensions?”

For those unfamiliar with how this works, Fergus and the likes of Sarasin invest people’s money to provide them with an income when they retire, siphoning off a huge chunk of money in the process, often laughably called “management fees”.

Part of their strategy is to pay as little tax as possible, sailing very close to the wind of legality, and sometimes ending up on the wrong side of it.

As recently as January of this year Eric Sarasin paid a “low six-figure sum” to close a tax fraud investigation into his affairs in Germany.

I wrote yesterday that Ireland is run for The Lads, and with impeccable timing, up pops Fergus and his enormous sense of entitlement to confirm my every word.

Ireland is still run for The Lads alright, and will continue to be so.

But The Lads are getting worried that their gravy train is about to be derailed.