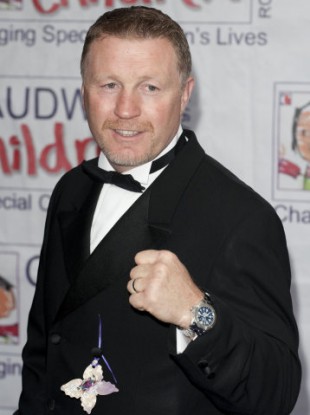 Seconds out, round one...

As the contestants prepare for the debate which is due to begin in about an hour, you can be sure that someone, somewhere will be playing the Rocky music to psyche themselves up. My money is on Mícheál Martin, but it could just as easily be Enda “the Empty Chair” Kenny. Much of the rhetoric will be about struggles and battles, and at least one paper will go with the “Valentine’s Day Massacre” headline, no matter what the outcome.

When it comes to public speaking, one of the best I’ve ever seen was not a politician but a boxer. Dubliner Steve Collins was super-middleweight champion of the world in an era when super-middleweight was about the toughest division in boxing. I brought him to Canary Wharf in London to talk to a sales team who were spread out around the world, all working alone trying to create new business. The Celtic Warrior wasn’t polished, but to this day those who listened to him still talk about him, and for a public speaker there is no finer accolade.

Collins spoke about life in the ring, and the tactics he’d use to get an opponent to break his rhythm. He’d mimic his opponent’s movement, his footwork and head fakes, and choose his moment carefully. When the time came, he’d throw in a little nod of his own- if the opponent followed he was on the hook, and a couple of seconds later he would be on the floor. Boxers call this tactic “lead and pace”, and anyone tuning in to RTE tonight will see plenty of it.

Collins also had a memorable response to a question about how he dealt with the thousands of blows aimed at him. “In my line of business, you’re not going to last very long if you keep letting people hit you in the f**ckin’ head,” he said gruffly. He reckoned in his entire professional career, he’d only really been hit maybe two dozen times, or less than once for every professional bout he undertook. Boxing is about power, but it is also about concentration and control, and Collins had the nous and the discipline to know that and keep a cool head, even when the other guy was trying to knock it clean off his shoulders.

Expect to see the others lead and pace Kenny into trouble. He’s quite an arrogant man and won’t like to be shown up, so Martin and the others will try to make him appear arrogant and lose his temper- if he does, he’s done for and won’t last six months in office.

Martin will ride the blows- he hasn’t lasted this long in politics by standing still, and his abdication of responsibility for the last fourteen years shows him to be quick on his feet.

But the one with most to lose tonight is Eamon Gilmore. A good performance on The Week In Politics last night has thrown him a lifeline, but if he turns on the indignation as he has at recent press conferences he’ll seem boorish and petty. If he can take the moral high ground and refrain from personal attacks when defending his tax policies he’ll be fine. If he can’t he’ll be on the ropes from the get-go.

As David McWilliams pointed out this morning, the debates are a sideshow and won’t tell us anything that will be of any use; like professional boxing, money now steers everything and what happens in the ring is almost secondary.

But as the country fights for its future, it may well offer some pointers as to who we have in our corner, and how they’re going to help us fight back.