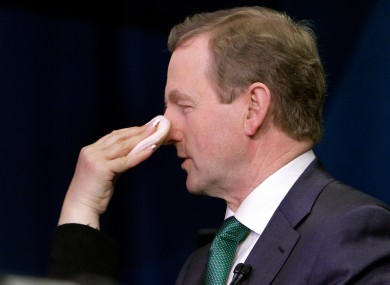 The loudest sound in Ireland today is the echo of the empty words around the death of Johnny Corrie.

Once again, the airwaves are full of the breast-beaters, filling their lungs on the oxygen of publicity while ignoring their own complicity.

And we are all complicit in Johnny’s death.

The very politicians who slashed the services that might have helped the dead Kilkenny man now elbow their way to the plinth at Leinster House – a stone’s throw from where Johhny died – to proclaim their dedication to the cause of homelessness.

As long as it doesn’t cost anything of course, and only until the headlines run out.

Elsewhere, the leaders of the Catholic church, whose legacy of institutionalised abuse causes hundreds, if not thousands, of traumatised Irish victims to seek solace in drugs and drink every day, has promised to act.

But the reparations due to the adults that became of the children they raped and abused remain unpaid. At every turn, they refuse to cough up the cash they have hoarded, swindled from the Irish people from behind a facade of piety.

And those of us who walk the streets of our cities have nothing to be proud of, either.

How many of us have contemptuously called people like Johnny scobes and junkies and scumbags?

How many of us have described them as a blight on our cities, an eyesore, a problem to be solved?

How many of us have laughed on a night out as we kicked their paper cups, telling them to “get a fuckin’ job” instead?”

How many of us went to the polls at the last election and voted for permanent austerity, ensuring that the first services to be cut would be the ones that might save the lives of people like Johnny?

How many of us have pursed our lips and piously proclaimed “I won’t give them money, because they’ll only spend it on drink or drugs”?

Even more so, on occasion, than having a roof over their heads. Everything else comes second. And if you don’t give them money, they’ll get it somewhere else.

What we have have created a society where the market decides who gets to have a home, and what kind of home it is.

We have created a society that says everyone is equal, until they slip up.

We have created a society that looks down patronisingly on those who live on the streets, without ever asking what it was that put them there, or offering them anything like a reasonable chance to turn things around.

And even in Johnny’s terrible death, the class card is played.

Johnny, we are told by the Irish Independent, “came from a caring family, but struggled with addiction problems since his teens.”

As if the families of other addicts don’t care.

As if the deaths of working-class addicts don’t matter.

As if addiction is selective.

Then the Indo tells us that “despite the best efforts of his parents and services, he could not defeat his demons” – something you never see written about a drug addict from Fatima Mansions or Dolphin’s Barn.

Sophie Pigot is rightly praised for not stepping over Johnny’s corpse and instead getting a policeman at Leinster House to call for an ambulance – but is this what we have come to?

Have we fallen so far as a society that we must make a heroine of someone who does exactly what one is supposed to do when they see another human being in need?

Johnny Corrie died in a Dublin doorway on December 1 2014, but he didn’t die alone.

Every one of us played a part in creating the country in which he could die so publicly, so helplessly, so needlessly.

We all stood over him as he passed on.

And none of us did anything, and now it’s too late.