It seems there is no better place to be a spin doctor than in Ireland.

This morning Terry Prone guested Newstalk’s Sunday Show. Toothless since the departure of Dunphy, I tuned in anyway, listening in vain for a question that would never be asked.

You might recall before Christmas that Terry Prone’s name came up in relation to the suicide of Kate Fitzgerald, who worked for her at the Communications Clinic and  who alleged in an Irish Times article that her employer’s attitude to her depression wasn’t all it should be.

For some reason, having published Kate’s original article in full, the Irish Times indulged in one of the most craven and embarrassing climbdowns in Irish journalistic history.

I sent in a few half-hearted tweets to the show this morning, one suggesting that Green Party leader Eamon Ryan might bring up the subject of Fitzgerland’s untimely demise.

But true to form, Eamon avoided asking the hard question, instead choosing to continue his admirably consistent run of abject failure in holding those in power to account.

I don’t know what was said between Prone and the Newstalk researchers; maybe they struck a deal that the subject of FItzgerald’s passing not be brought up as condition of Prone’s appearance.

What I do know is that one of the most famous players in world football still doesn’t talk to me because I wouldn’t allow him to dictate the terms of an interview.

Because as a journalist, I’m the one that decides what questions the subject gets asked – not the other way round.

And if media outlets like Newstalk decide that it’s not in their best interests to ask certain questions, than we must ask questions of them. 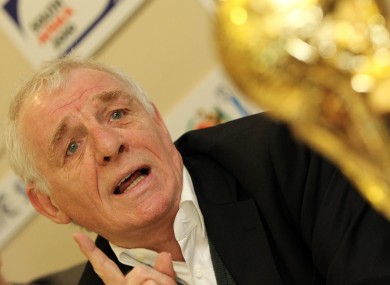 A man who one day may be president of Ireland, and Gay Mitchell.

Bosses don’t often give compliments, but I remember one in particular being lyrical the night before an event.

We were sitting by my desk late one night, ties loosened, going through the last details before the event started at 0800 the next morning.

“You’ve done a great job- the concept, the execution, the whole lot has been brilliant. I really appreciate that.”

“Thanks,” I said, “but we’re not there yet. One more major thing will go wrong before the curtain goes up.”

Michael D is probably basking in the glow of praise from his political masters at the moment, safe in the knowledge that the Aras is his for the taking.

Any hopes David Norris had of winning are receding by the day- he gambled on secrecy with the clemency letters and as always when you do that in politics, he lost.

Gay Mitchell is another man whose gamble has backfired.

The decision to administer at political punishment beating to Martin McGuinness echoes Fianna Fáil’s efforts to stop the march if Sinn Féin in the last general election.

On that occasion the Party of Dev were soundly defeated, their leader Michael Martin left looking like a petulant, argumentative and selfish child.

So too with Mitchell. The man is a skilled operator, and his bullying demolition of McGuinness’s character on the Dunphy Show would have been complete, were it not for the bravery of the host and the fact that McGuinness was sitting in the studio with him.

I’m not 100% certain that Mitchell agreed with the party tactic of going after McGuinness, and by Tuesday he was rowing back from his vitriolic position, but by then the harm had been done.

What we now know about Mitchell the candidate is that he is the youngest of nine children and he hates McGuinness with a passion. His attempts to drum up support with his “Party of the Treaty” rallying cry will come up short.

Much has been made of the fact that the Irish people are as a rule politically conservative, and that is who Mitchell is trying to appeal to, but this tends to fade somewhat in relation to the Aras.

Our last two presidents have been women, one of whom was a Labour party candidate. Mitchell would do well to note that in modern Ireland we may still be conservative, but our conservatism doesn’t stretch as far up the Liffey as the Park.

The Irish people are looking for a figurehead, not a statesman, and over the past week Mitchell hasn’t looked like either.

Davis, Gallagher and Dana are falling away, each seemingly limited and pigeonholed, all the while applying for a job that requires breadth of vision.

The reason the other four candidates have the upper hand is not because they are better; it is becasue that they have long been in the public eye as politicians, and their visions are better known to voters.

All the while, Michael D is still fighting the right election but like the death of the keynote speaker’s mother, there is still a chance for him to stumble, not least given the way the Irish media has chosen to cover the campaign.

Every day, we are faced with new “controversies” and “scandals”, and it’s worth taking a look at a few of those non-stories.

Davis earned around €400,000 over ten years on various boards- big deal, it’s about €40k a year over the period. Not exactly Celtic Tiger wages.

Norris appealed for someone to be granted citizenship – politician uses office to represent people shock! Lazy journalism, complete with the “gay lover” smear angle. It died on the news stands on Monday morning.

Mitchell is against the death penalty and wrote a letter on behalf of a pro-lifer like himself convicted of murder- now, remind me again of why we are supposed to be surprised?

McGuinness was involved in murder and intimidation- would we expect any less from a man who has admitted being in the IRA?

For years we’ve been told that Sinn Féin and the IRA are one and the same, yet some would lead us to believe that the fault is with McGuinness, not Republicanism with a big “R”. You can’t have it both ways.

No doubt there are people going through Michael D’s rubbish looking for something to spring on him, but I doubt there are any serious skeletons left to be dragged out of his closet.