Darren Scully and Enda Kenny. (Not pictured- all their black friends)

Every now and again a politician says something so profound that it echoes in our history books.

“Peace in our time.

“Tear down this wall”.

“I will no longer represent black Africans”.

Thank God for the appalling stupidity of Darren Scully – an avowed non-racist, some of whose best friends aren’t black – for once again showing us that austerity produces not just hard choices and more poverty for the already-impoverished, but it’s a greenhouse for racism too.

Far from drowning in a sea of celtic tiger-era skinny lattes, our racists and racism survive and thrive, especially now that we’re poor again.

I’ve written before about the ridiculous nature of some of the rubbish that gets spouted about Africans in Ireland by the defenders of the ideologies of Hitler , and yet still they come. Our friend Sven with his “99.8% of sex crimes in Oslo are committed by non-Europeans” comment on another piece is just one of them.

I argued long and hard on a similar subject with another crackpot racist (this time from Israel), whose basic assertion was that people were being raped in their droves by the Muslim hordes right outside my very window.

Be that as it may, there would be no statistics, as Swedish police do not record ethnicity- let alone religious affiliation- when investigating crimes here.

Gavin Titley wrote a brilliant piece today for politico.ie outlining why the likes of Scully think it’s OK to be staggeringly and publicly racist, and then deny it as not being racism at all.

I’d like to say read it and learn something, but having listened to George Hook’s section on it yesterday, it’s more like read it and weep.

Of course, there is an elephant in the room here too, and that is his continued status as a member of Fine Gael. Whereas a non-racist political party would have kicked him to touch the second he opened his gob, Fine Gael can’t.

Because to do so would be to admit that Enda Kenny’s Patrice Lumumba joke was equally wrong. 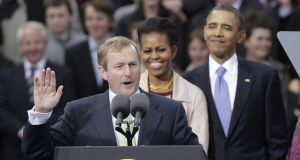